Reality will always blindside those who turn their backs on it.

Joseph P. Overton created the Overton Window to describe the limits of politically acceptable discourse. Topics within the Window can be discussed, while subjects outside are suppressed. The Overton Window moves as society changes. It can be forced to move by opinion leaders. One example comes from Hans Christian Anderson’s story The Emperor’s New Clothes. The con men proclaim that only smart people can see the clothes. This puts the subject that the emperor is in fact naked outside the Overton Window. No one wants to mention it, lest he be thought stupid.

Crystallization is the phenomenon by which a group arrives at a common opinion and then enforces that opinion by punishing dissenters. Crystallization is very harmful to the progress of science. New hypotheses that cover new facts face resistance. The forming, breaking, and reforming of opinion about the Emperor’s New Clothes demonstrates this process.

A Preference Cascade occurs when people realize that an opinion they each held privately is in fact held by many other people. This can cause drastic changes in group behavior. Returning to the Emperor’s New Clothes, once the child states that the Emperor is naked, all the adults feel free to state the same thing. They start mocking the Emperor and the con men are forced to flee for their lives.

When the Overton Window not longer includes reality, in other words when reality can no longer be discussed, the stage is set for a preference cascade. Crystallization may make it harder to reference reality in a discussion. However, eventually reality will force itself into the public discussion. The resulting cascade can be very violent.

Ashli Babbitt was a wife, mother, 14-year Air Force veteran with tours in Iraq and Afghanistan who traveled from San Diego to DC to protest the theft of Donald Trump’s 2020 landslide.

After the rally she went to the US Capitol to peaceably assemble to petition the government for the redress of grievances. At the Capitol while looking through a window broken by others, this unarmed woman was gunned down without warning by Capitol Police.

Please pray for Ashli, her husband, her children, and the others she leaves behind.

And as you remember her, say her name.

It does not matter

After the Tea Party movement got started and had generated a backlash from the Left, a sign appeared at a Tea-Party rally:

the Left will call it RACIST.

Although many have claimed that President Trump called for violence, no one quotes any such call from his speech. At this point President Trump could recite “Mary had a little lamb” and the Left would denounce him and insist that everyone else join that denunciation.

Once there is such a quotation, then we can discuss denunciation.

Mary had a little lamb,

Its fleece was white as snow.

And everywhere that Mary went

the lamb was sure to go.

Today, January 6th on the Gregorian calendar is the Feast of the Epiphany. For our Orthodox Christian brothers who use the Julian calendar it is the Season of Advent.

Today in Washington DC we wait for revelation at the Save America March.

To show our support for the March, we are asked to sound the Horns of Jericho at noon Eastern Standard Time. 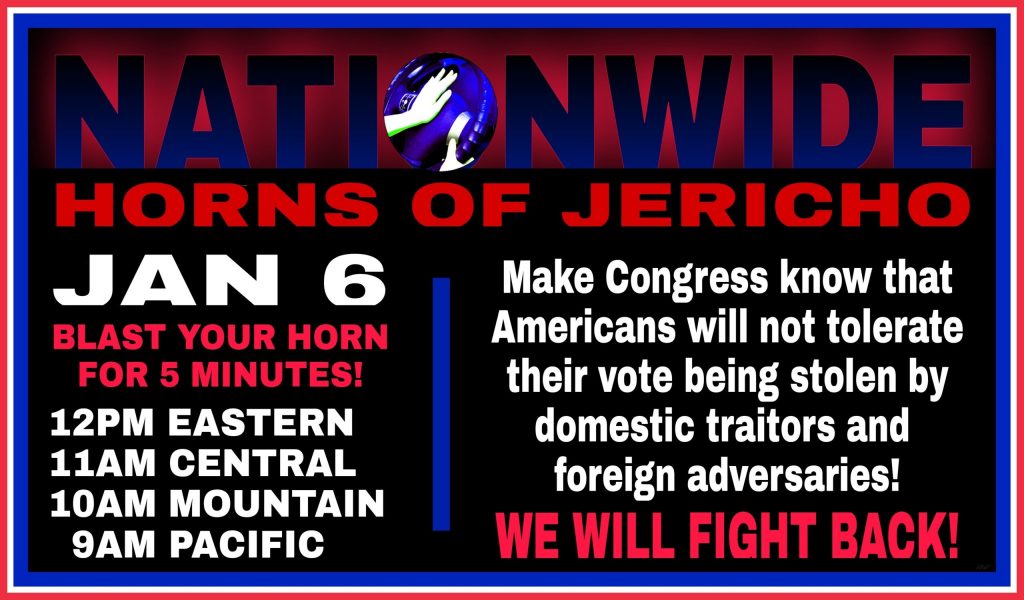 As we head into 2021, remember that Americans

in the middle of a smallpox epidemic (death rate over 30%)

will cross an icy river and

march for miles in a snow storm,

to kill their enemies in their sleep,

Then to toughen up, Americans will spend the next winter at Valley Forge.

Twenty-twenty was the bicentennial of the birth of the Civil-War General, William Tecumseh Sherman. Before his brilliant campaign that culminated in the capture of Atlanta, GA and his march to the sea that contributed to the defeat of the South, Sherman was in command of a portion of the Union forces at Shiloh, TN.

After a disastrous first day at the battle of Shiloh, the story goes that

Sherman said to his commanding officer, Ulysses S. Grant, “Well, Grant, we’ve had the devil’s own day, haven’t we?” After a puff of his cigar, Grant calmly replied, “Yep. Lick ’em tomorrow, though.”

We have had the devil’s own year. So, for us, tomorrow dawns.

Be not afraid. We win; they lose.

On Tuesday, 2020 December 29th President Trump recognized religious freedom in a proclamation commemorating the 850th anniversary of the martyrdom of Thomas Becket on 1170 December 29th.

As I noted in my 2020 December 29th post early dates are in the Julian calendar.

“We could not now take time for further search or consideration, our victuals being much spent, especially our beer, and it being now the 19th of December” (Mourt’s Relation, 1622, commonly attributed to colonists William Bradford and Edward Winslow).

Reading this in the 21st century we might be amused by the mention of ‘beer’ and not give a moment’s thought to the ‘19th of December’. However, both take on new meaning for us when we consider the original meaning of the words.

For the Pilgrims in 1620, Dec 19th was on the Julian calendar not the Gregorian calendar we use today. So the 400th anniversary of their landing is not Dec 19, 2020.

Likewise for the Pilgrims in 1620 beer meant something much different than it does today. At that time water was usually contaminated. Water often carried disease. It was much healthier to drink beer. (Just as Jesus’s miracle at the wedding feast at Cana, did not just transform water into wine, but in fact transformed non-potable unhealthy water into clean drinkable wine.)

Original meaning is important as that is what survived the arduous process to become law. Redefining words is a cheat.

I live in Madison, Wisconsin and have taught mathematics, statistics, and computer science.

I am married to a wonderful woman, who luckily likes math too.

My BA in statistics comes from Princeton University and my PhD in Mathematics from UW-Madison.

My mother was a direct descendent of a marine who served under the Revolutionary War Naval Captain John Paul Jones. Through her, I know we are a nation forged by our fight for freedom.

My father was a legal immigrant from South Africa. Through him, I know that we are a nation of laws. The legal immigrant is in his heart an American before he arrives on our shores because he has followed the law to get here. This reverence for the law and pursuit of the American Dream renews America for all of us.

Be not afraid. We win; they lose.